Going All in on ALL OUT 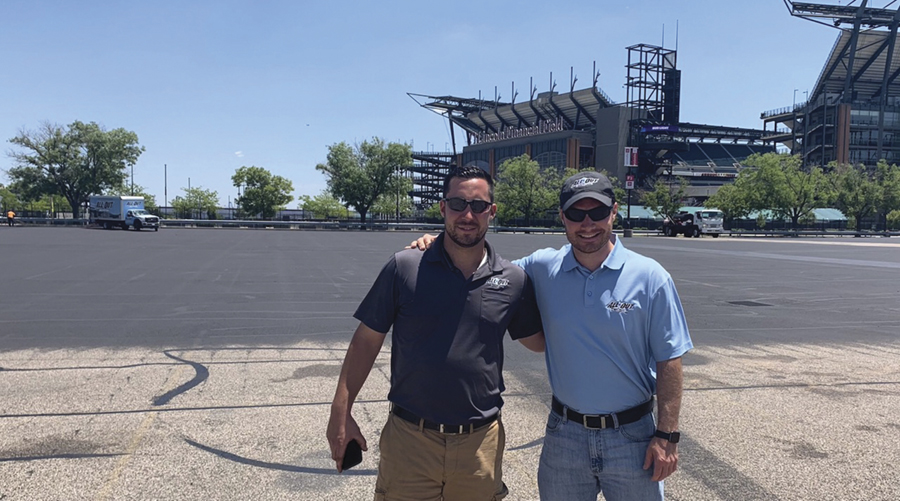 Kevin McGarvey can’t help but recall the first time he and his business partner, Marco Menna, tried to do business at Philadelphia’s famed Wells Fargo Center, home to the city’s professional basketball and hockey teams, the 76ers and Flyers.
With huge sports venues come huge concerts, and McGarvey and Menna saw a visit from Kenny Chesney as a chance to pick up some cash. So, the pair printed up $400 worth of shirts that read “Kenny’s Girl” in the hopes of appealing to the female concertgoers tailgating in the city’s largest parking lot. This was back in 2007, when the two were seniors at Cardinal O’Hara High School in nearby Springfield, Pa.

Unfortunately, they learned they should have appealed to whomever was in charge of issuing permits for such things; the two were interrupted within seconds by the venue’s security, and their inventory was confiscated before they could make a dime.

Now, a dozen years later, the pair own ALL OUT Parking Lots, an asphalt maintenance and repair company with an ever-expanding book of clients that includes – you guessed it – the Wells Fargo Center.  “It’s nice to have a good business venture at the stadiums, as opposed to the one we had as seniors in high school,” he said with a laugh.

More Than a Name
Menna and McGarvey first teamed up in elementary school and stayed friends throughout high school and college. Along the way, they always seemed to have “side hustles,” said Menna. They landscaped when the weather was nice, shoveled snow when it wasn’t and tried to sell some t-shirts.

“We just always had that entrepreneurial spirit in us,” explained McGarvey. During the summer before their senior years in college (Menna was at Temple University, McGarvey at West Chester University of Pennsylvania), they decided to start sealcoating residential driveways. They’d gotten the idea from a friend who was doing the same in another town close by, and they made good money.

“From there we realized we should do this once we graduated,” said Menna. Added McGarvey: “We thought we could compete and win (against the other sealcoating companies). We decided to say, ‘Hey, let’s go into this all-out,’ and that’s where we got the name.”

Putting Themselves ALL OUT There
In the eight years since the summer of 2011, McGarvey and Menna have steadily grown the company. Four years ago, they began to expand into commercial lots, which has brought new opportunities and bigger clients. The two now have 25 employees and eight trucks, headlined by a pair of NEALCO Equipment, LLC customized, hydraulic, piston-pumped machines: a 1,000-gallon, flatbed-mounted unit; and a 760-gal. trailer with a spray bar.

A big part of their success can be attributed to their marketing efforts, the partners said. Menna, who studied Sports Marketing in college, began making videos to highlight their accomplishments. The result was an approach that successfully paired their social media savvy with old-school, tried-and-true networking methods, like trade shows, direct mail and cold calls.
“You name it, we tried it,” said McGarvey.

Mainly, though, the two credited the staff they’ve hired during their company’s growth, some of whom had even seen their videos prior to being hired. After all, great marketing only hurts if you aren’t prepared for the business it brings in.
“You have to have the infrastructure to handle it,” said Menna.

In 2018, they topped their goal of $2 million in revenue by five percent, marking their best year yet.

Why it Works
For all the marketing know-how and entrepreneurial fire, one of the biggest reasons the partnership between McGarvey and Menna works boils down to trust. McGarvey explained that while many may think going into business with a childhood friend sounds like an ideal situation, it’s rare that both parties are willing to put in similar amounts of sweat equity.

“If you’re any bit unsure of that, then I would say don’t risk your friendship and move onto something else,” said McGarvey.
When it works, however, the results can be impressive. And when that happens, it doesn’t always feel like work.
“We put our heads together and try to have fun with it,” said McGarvey. 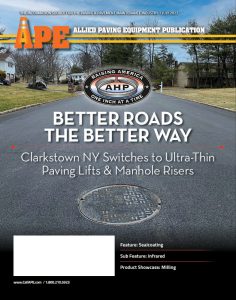